9/11 musical about to hit Broadway 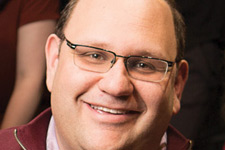 Only four Canadian musicals in history have seen the light of day on Broadway.

Michael Rubinoff’s Come From Away – a heart-warming tale of kindness and generosity in the face of tragedy – is on its way to being number five.

“It’s still surreal,” said Rubinoff, BA’98, LLB’01, who enlisted Canadian writing team David Hein and Irene Sankoff to bring to life one of the side stories of 9/11, in which the community of Gander, Nfld., welcomed displaced passengers from grounded flights into their hearts and homes during the dark days that followed the terrorist attacks.

“I think if you’re in any profession and you look at what is the pinnacle of that profession, as corny as it sounds, this is the dream come true. This is, professionally, what I’ve always wanted to accomplish. From conceiving the idea and participating in its development throughout, to having it land on one of the greatest stages in the world is really powerful – and to be able to do it with such a beautiful show and such a beautiful story that is about Canadian history.”

Rubinoff, who’s been associate dean of Visual and Performing Arts at Sheridan in Oakville, Ont., since 2011, conceived of the idea for the musical in the aftermath of 9/11 when he was a young lawyer, articling at a Bay Street firm. At the time of the attacks on the Twin Towers, 38 planes were grounded at the airport near Gander, with 6,579 passengers on board. The locals welcomed passengers into their homes to rest, gave them hot meals and showers and entertained them as well.

Rubinoff was deeply moved by the outpouring of kindness and humanity shown by the people of Gander during such a frightening time and felt others would respond to the story in a similar way.

“In what I do, the best way I know how to tell stories is through musical theatre. When you’re developing musicals you need a compelling story and a compelling reason to musicalize it. Music is in the DNA of Newfoundlanders. I tried to buy every Great Big Sea recording so I could get the soundscape of Newfoundland,” he said with a laugh. “These Newfoundlanders made me so proud to be a Canadian, so to be able to honour them by sharing their story in this way is really powerful.”

Just as he was starting his second career in academia in 2011, Rubinoff approached New York-based husband-and-wife writing team Hein and Sankoff about his idea for Come From Away and they were immediately on board. The couple travelled to Gander during the tenth anniversary of 9/11, staying for nearly a month and interviewing passengers and members of the community. When they returned, they workshopped the musical with Sheridan students through the Canadian Musical Theatre Project, an incubator established by Rubinoff to develop new Canadian musicals.

Since then, the musical has played record-breaking engagements in La Jolla, California; Seattle, Washington; Washington, D.C. and at the Royal Alexandra Theatre in Toronto, Ont. where Rubinoff’s love of musical theatre was first sparked at the age of 13 during a performance of Les Miserables. Western alumna and actress Astrid Van Wieren, BA'88, plays the character of Gander resident Belulah Cooper in the Canadian cast.

“If there’s one thing I’m not, it’s a writer,” said Rubinoff. “I knew if I could find the right people, that they would be able to authentically tell the story. This is a story we needed to hear because what happened was so unique. People needed to know that at this very dark point in history there was this story about humanity and the best of our values and human kindness. It’s just as relevant today. It’s always a good time to share a story about human kindness.”

While both American and Canadian audiences were incredibly enthusiastic, Rubinoff said it was interesting to note the differences in responses from each nationality.

“Americans had no idea about this story and it catches them by surprise in a really beautiful way and it’s comforting to them to know that there was this outpouring of humanity on that day. Our Canadian audiences reacted in a way that’s quite rare for Canadians … they said the show made them so proud to be Canadian, and we don’t usually talk like that. We have very quiet patriotism. That really resonated with me.”

Broadway previews begin on Feb. 18 and the show will officially open on Broadway on March 12. As a purple and proud Western alumnus, Rubinoff is pleased to host a group of New York-based alumni on Founder’s Day on March 7 at the show.