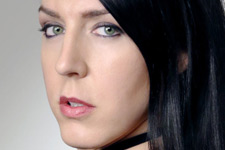 Under the gender category, Joshua M. Ferguson’s government identification indicates ‘M’ for ‘male’ – a designation incongruent with the writer and filmmaker’s identity.

Ferguson, BA’09 (Film Studies), identifies as non-binary trans and uses the pronouns ‘they,’ ‘them’ and ‘their’ to reflect gender identity. The 34-year-old alumx – the preferred singular, gender-neutral moniker for alumni – recently applied for a non-binary birth certificate in Ontario. If the application is successful, Ferguson’s document will be the first such birth certificate issued by the province.

“Many people ask why it is such a big deal. For me, it’s always been a big deal. I do not identify as a male or a man. Yet every time I have to give someone a piece of identification, even if it’s at the liquor store – something very non-threatening for most people, the employee always looks at it, does a double take, looks at me and polices my gender in that moment. That doesn’t happen for most people,” said Ferguson, who is originally from Ontario but now calls Vancouver home.

“Because my gender expression and my gender identity (on my identification) conflict, it opens me up to stress every time I have to go through airport security or cross a border. It presents a lot of additional, emotional pressure on my life that I have to deal with.”

While Ontario currently provides a gender-neutral option ‘X’ on health cards and driver’s licences, the province has never issued a non-binary birth certificate. As such, the process to change a gender designation to non-binary on the document was without clear instruction, Ferguson explained.

“Typically, if you apply for a change of sex designation, or a change of name on your birth certificate with Service Ontario, they clearly outline the instructions as to how correctly complete the application, to ensure the change you are applying for, goes through. But to change the sex designation to non-binary, there are no instructions to do that,” Ferguson said.

This meant jumping through some extra hoops to ensure the application was thorough and complete. Ferguson made repeated calls to confirm the application wasn’t the typical gender designation change from M to F or F to M, to make sure the accompanying physician’s letter was done properly and to verify guarantors were accepted.

What was promising, Ferguson added, was there was no need to amend the actual application. Although a non-binary birth certificate has never been granted by the province, the application doesn’t ask you to check off a box indicating you are applying for a change from male to female, or female to male, specifically. It simply asks the applicant to fill in blanks indicating the change they are applying for.

“They have part of the infrastructure built into the application already. I was comforted and encouraged by that. If they aren’t going to issue non-binary birth certificates, why would they have those spaces,” Ferguson noted. “I had a feeling I might be setting a precedent and I wanted to do a bit more work just because it might be the first application of its kind. I wanted to make sure the application was as strong as it could possibly be.”

“When you’re an oppressed person, the system makes it seem like being an equal member of society, being a socially and legally recognized human being like everyone else, is an insurmountable obstacle. And for years, the system was oppressing me to the point where I actually didn’t feel like I had the ability to fight for my social and legal recognition.”

Advocating for marginalized individuals emerged as a pattern in childhood for Ferguson, who first stood up after watching classmates endure a teacher’s physical abuse in Grade One. Experiencing discrimination as the only out queer person in a high school of 1,500, and switching schools a handful of times because of that, only solidified Ferguson’s desire to “stand strong in the face of bigotry and intolerance.”

Ferguson’s application has received wide media attention, garnering tweets of support from politicians, including Ontario Premier Kathleen Wynne. It has also elicited responses of gratitude from families, youth, parents and educators around the world.

As much as one third of today’s youth doesn’t identify as straight or cis-gender, Ferguson added, and “this is something that as a society, we can’t ignore. This is the first step. I can’t actually change any of my other forms of identification, even if I lived in Ontario, without this (new birth certificate),” they noted.

“The government is working with Passport Canada to develop X options on passports, and that’s great – of course we need that and I’ll be one of the first people in line to get an X on my passport. But at the same time, how am I supposed to get that, if I can’t get a non-binary birth certificate?”

Bill C-16 – An Act to amend the Canadian Human Rights Act and the Criminal Code – had its third reading in the Senate last week and is on its way to becoming law. The bill seeks to prevent discrimination against trans people in federally regulated workplaces and services and adds language to the Human Rights Act and to the Criminal Code, stipulating Canadians should not face prejudice or discrimination on the basis of “gender identity” or “gender expression.”

Gender identity is defined by the Ontario Human Rights Commission (as it will be federally) as the way a person experiences gender, noting “it is their sense of being a woman, a man, both, neither, or anywhere along the gender spectrum.”

Gender expression encompasses the ways in which a person presents their gender publicly, including through “behaviour and outward appearances such as dress, hair, make-up, body language and voice. A person’s chosen name and pronoun are also common ways of expressing gender.”

Ferguson’s application, filed late last month, will be processed by the Ontario government within a span of six weeks.