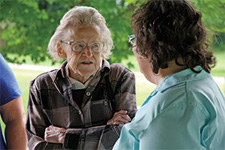 Vicki Schwean would be happy with one. But she knows it will be many, many more than that.

“If just one kid comes out of here a whole lot healthier, with much more promise for the future, then that would be awesome,” said Schwean, Dean of Western’s Faculty of Education. “But it won’t be just one – there will be thousands of kids.”

On October 29, Western announced the opening of the Mary J. Wright Research and Education Centre at Merrymount, a partnership between the university and Merrymount Family Support and Crisis Centre. The new centre will focus on interdisciplinary research that examines factors influencing early childhood development, with the goal of bettering the health and wellbeing of society’s most vulnerable children.

“This is one of the proudest moments of my life. We don’t put enough emphasis on the need to ensure our children thrive and flourish. There are so many children in this country today – in this city today – that live in circumstances that compromise their wellbeing,” Schwean continued. “We’re going to work together through this new centre to take our understandings and translate those into evidence-base strategies that can give these kids hope.

In June, Western closed the Mary J. Wright University Laboratory School with an eye toward a new opportunity to benefit children in the London community and build on the legacy of the school’s legendary namesake.

Wright established the University Laboratory School at Western in 1973. She was the “den mother to a generation of psychologists,” served as the school’s director until 1980, when she retired. In 1983, Wright published a book outlining the design and principles behind the lab school, as well as a summary of its research. In 2001, the innovative laboratory preschool was renamed the Mary J. Wright University Lab School in honour of her work and a $500,000 donation she made to Campaign Western.

Her family has been involved in the development of the new centre.

Due to open in January, the centre will serve as a bridge between a team of researchers from Education, Science, Social Science and Health Sciences and the community members who can benefit most from their work across three signature areas of research:

The centre will also work to train the next generation of developmental researchers and professionals through graduate student practicums and internships, and build capacity within the local community by sharing their knowledge with professionals who deliver children’s services.