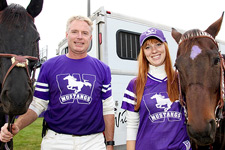 It wasn’t a hard decision for Bruce Lamb, HBA’85, and his daughter Tori, HBA’14, when the idea was floated: Come out to all the Mustangs home football games and, while you’re at it, why not bring along your horses?

“We’ve been to games before – but never in this capacity,” Bruce said with a smile, as he prepared his horse, Gamble, earlier this month for the Western/Carleton match-up at TD Stadium.

Today, The Lambs are carrying on the university football tradition of ‘touchdown laps.’ After each Mustangs score, a mounted rider atop a mustang (horse, not football player) rides around the track circling the field carrying a large Western flag.

Although the equine tradition is a fairly recent one, fans have expected touchdown laps for generations. Anyone who attended a Mustangs game in the 1970s, 1980s or 1990s probably knew Allen ‘Albert’ Philbrick, famous for running laps around the track after every touchdown the Mustangs scored.

According to university legend, the celebration began one day in the early 1970s when Philbrick was out for a run. Noticing that the Mustangs were playing, he stopped to watch. As he looked on, Western scored a touchdown. Head coach Frank Cosentino said Philbrick must bring good luck and a week later asked him if he would be a faculty advisor for the team. Though some faculty accused him of “stealing the team’s glory,” players and students enjoyed the ritual that he kept up for nearly three decades.

Since then, touchdown laps have been the purview of the four-legged variety, with the Lambs offering the latest version.

The Lambs landed the job after seeing a Facebook post earlier this year looking for someone to take over the reins as the Mustang rider. Bruce and Tori came out, did a test run and things worked out.

With the Mustangs posting a league-leading 323 points in just seven games, they have been busy. And with only three games under their belt, there have been a few false starts along the way.

“We had to learn some things about when to go and when not to go,” Bruce said about the traditional lap around the track. “At one point, there was a touchdown, but it was called off. So, we learned to wait until we see the points go up on the board – then we ride.”

Tori brought her horse, Joey, and joined her dad for a test run early in the year to ensure it would be safe, and enjoyable, for the horses.

“We came out for sort of an audition to see how they would handle the track and riding with holding the flag,” she said. “The horses were a little nervous at first. But it seemed like something they could get used to. For that first game, we didn’t know what to expect. We got here early to let the commotion build around them and they took to it great.”

While she’s been to countless football games as a student, and many more with her parents, having this new responsibility is pretty exciting for Tori.

“We always grew up with horses; we’d get together for trail rides. This is really combining both of our loves. We love Western and we love riding,” she said. “It seemed like a fun thing to do, and it’s great for the horses because the more they get exposed to new things, the better it is for them.”

Bruce, who competes in eventing (cross-country) with Gamble, said being part of this Mustang tradition is a thrill. Prior to the games, Bruce and Tori can be found just inside the entrance greeting fans as they arrive at the game.

“I would love to see a dynasty start, seeing my grandkids out there riding horses,” he said. “We’re enjoying it. We love the games; we love the crowds; we love the excitement.”

“Especially when you go around and see the fans cheering, it’s great,” said Tori. “Whenever I went to the games, I always watched for the horses. Now, I’m getting to do it.”

Not to look too far ahead, but with the success of Mustangs football - an undefeated regular season – this year’s Vanier Cup is being held Nov. 25 at Tim Horton’s Field in Hamilton, Ont. So, could there be a road trip for the horses in the future?